Propolis May Help Prevent Damage to Liver by Alcohol 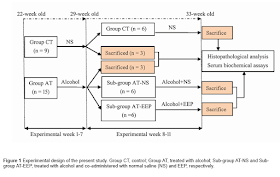 The hepatoprotective effects of the ethanolic extracts of propolis (EEP) on alcohol-induced liver steatosis were investigated in Wistar rats. Chronic alcoholic fatty liver was induced by administration of 52% alcohol to male Wistar rats at the dose of 1% body weight for 7 weeks. Then animals were simultaneously treated with 50% ethanol solutions of EEP or normal saline at the dose of 0.1% body weight for 4 further weeks. Serological analyses and liver histopathology studies were performed to investigate the development of steatosis. Microarray analysis was conducted to investigate the alterations of hepatic gene expression profiling. Our results showed that 4-week treatment of EEP helped to restore the levels of various blood indices, liver function enzymes and the histopathology of liver tissue to normal levels. Results from the microarray analysis revealed that the hepatic expressions of genes involved in lipogenesis were significantly down-regulated by EEP treatment, while the transcriptional expressions of functional genes participating in fatty acids oxidation were markedly increased. The ability of EEP to reduce the negative effects of alcohol on liver makes propolis a potential natural product for the alternative treatment of alcoholic fatty liver.
Editor at 10:15 AM
Share